Serendipity is such a nice word

When working as an “event photographer”, the tendency is to set a high-ish ISO (400 or 800), attach a competent and slightly diffuse flash to the camera and just document the scene as a dispassionate observer with an agenda.

I have no problem keeping such elemental guidelines prominent in my approach, but I also like to look for opportunities to break out of that static mode, turn off the flash and crank the ISO up. Especially when the ambient lighting reveals such surprises as I encountered a couple of days ago…

Last week, I was asked to photograph an event hosted by the management of the building where my studio is located, the Little Five Points Community Center. It’s a non-profit organization in an almost 100 year old building that offers reasonably priced studios to artists and arts organizations. As icing on that cake… it’s in Little Five Points, where there is never a dull moment or a shortage of interesting people.

The old cafeteria is right outside my studio (which is half of the original kitchen), and I use it when I need to build a large set. The ceiling is high, the room is large and the really ugly florescent lighting emanates from fixtures that are recessed into the ceiling (ie: out of the way).

The hallway off the cafeteria is several stops darker and that’s where the best photographic moment of the day presented itself to me.

I had been photographing the Manga African Dance troop in the cafeteria, and moved over to the exit to the hallway for a new point of view. In that hallway was this beautiful young woman. She was watching the same dance performance, and sort of subconsciously spinning an inflatable globe…

I saw her as I crossed the room, but rather than approach with the camera’s presence on her, I turned back to the room to check my point of view on the performance that was in progress. But while watching, I turned off the flash and knocked the shutter speed down by two stops. Then I turned, focused and exposed one frame of the globe spinning woman (she smiled!).

It wasn’t until downloading later that evening that I noticed the orientation of the globe, which was undoubtedly set for me by the rhythms that surrounded us at that moment. 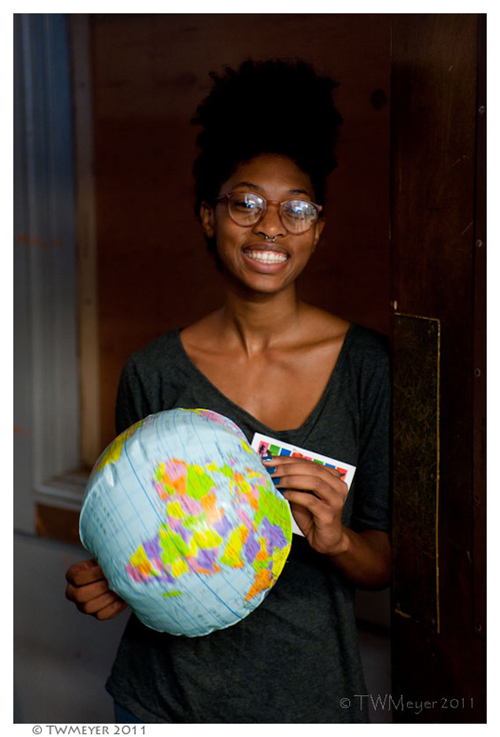