portrait of a working artist in a really small room

Christina Kober is an enterprising jeweler who understands the value of self promotion and is working it from many angles. She asked me to make portraits of her at work.

Her studio is small, but quite efficiently laid out and easy for one person to use. Adding a photographer (even a thin one) and a light stand with a diffusing modifier (even a small one) quickly shrinks it to the point where everything is a bumping hazard. And some of her stuff, you don’t want to bump.

Christina Kober: Window light for main, strobe for back light

In the above image, a window is the main light on camera right. I used a favorite old 30 inch Westcott Halo for a back light. Unfortunately, the 30 inch Halo is now out of production and there’s nothing that replaces it. I love it because it’s small, provides a directional yet soft and shape revealing light, works really well with speedlights and it’s convex front diffusion panel can be placed very close to a subject. I prefer the enclosed construction of the Halo because it doesn’t create the contrast lowering spill that is a problem when a comparable shoot-through umbrella is used in a small room.The Halo kept the wall behind her a deeper blue, in contrast with the warm window light on her skin, hair and scarf. 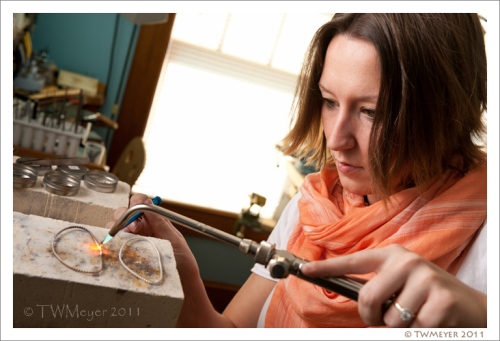 This image shows the intensity of Christina’s concentration when she’s working with the torch on a very small piece. I wanted to light her from my left, where there was only room for an undiffused, small and flamable light source, all of which were just not good ideas.  I dodged those issues by putting my Lumedyne on a stand above and behind her (to the right), with a 5 degree grid on it. That light was pointed over her head toward the closed white blinds on the window to my left so that it bounced from those blinds onto her face as a softer light, while the window light from across the room created an edge lighting on her right hand and the tools she was using. Grids do collimate the light somewhat, but not as tightly as a snoot or fresnel head would. This grid is held on with velcro… not exactly a light tight seal so maybe some of that rim light was leakage from the grid.  I’ve learned to exploit such   idiosyncracies in my vintage equipment… t